So let me open up with saying this: the “Big FAQ” is here and it’s glorious.  It marks a watershed moment for Games Workshop, in my opinion, and heralds an edition of gameplay that sees regular, consistent updates to the rules published in set intervals that we can expect.  Gone are the days of haphazard postings, obscure references, and byzantine scrying through the muck to find what you need.  It’s all clearly laid out at a set schedule.

What’s more, is that these are definitely influenced by player input. GW didn’t just arbitrarily show up and say the fundamental methodology of the game needs to change. These are all practical, real-world results of months (years?) of play-testing. This is not the knee-jerk reaction some claim it to be. Don’t let the vocal minority on forums and Facebook fool you; for every neckbeard complaining, there’s a hundred that are pleased with the changes.

But let’s get into the nitty gritty.  I’m sick of all the negative shit people are spouting off about this FAQ.  It’s ridiculous!  I’ll just dive right in and tackle the biggest issue people are having: no more turn one deep strikes.  Let me just start off by saying anyone that’s complaining about this is probably an awful tactician* and is relying on a one-trick-pony style army to win their games.  Warhammer is about playing the game and reacting to circumstances. At no point is it fun to just have this enormous synergy chain take an hour for the entire first turn and claim victory afterward. That isn’t a game. It’s you formulaically shuffling things around without any sort of pushback or challenge and reclining smugly to watch your opponent cope with the deathstroke.

To foster a game based on skill, tactics, and clever maneuvering, one must expect changes like this limitation on turn-one deep strikes to surface, for the betterment of the game.  Look at any tournament (or, for that matter, any other semi-competitive game of Warhammer 40,000) and you’ll see a trend: the games are decided by turn two, even as soon as turn one.  The function of the game should aspire to be, well, a game. If the entire thing is done and over in the first thirty minutes, that’s not a game, it’s a lopsided display.

If your entire strategy was “kill the entire enemy on turn one without a chance for enemy reprisal,” you’re not a good Warhammer player.*  It’s as simple as that.  You’re just using cold, hard mathematical advantage to win games (opponent can’t harm reserves, you drop in, strike first, game over, etc).  The reason I like the beta change is this: you can still use these strategies, but there is a significant risk/reward factor at play now.  Put half your army in reserves?  Better survive a full turn while they’re en route!

There are so many people wailing and gnashing their teeth.  The vitriol in the forums is insane.  INSANE.  I just have to ask these people why they think their entire army’s identity is built around a few deep striking units?  Sure, 8th Edition Blood Angels deep striking Death Company and Dreadnoughts and Chaplains and all sorts of nasties turn one was a great and effective tool to use for the infancy stages of 8th Edition.  But what about the tactical marines?  The predator tanks?  People were “net-decking” these one-hit-wonder armies and it was devastating to the health of the game, both gameplay wise and thematically.

But here’s the hilarious part: Did you know you couldn’t deep-strike in any previous edition of Warhammer 40,000 before turn two? And even then there was a chance it would fail?  And lets assume you made that reserve roll.  You then used scatter dice!  You could go off the table, and instantly lose your precious unit.  It was a risk.  It was a gamble.  When it paid off, it was great! Games Workshop tried allowing turn one deep strikes at the onset of 8th and it was so overwhelmingly lopsided, they’re going to back to a modified version of the old ways. A better version!

The risk of deep striking was largely, if not entirely, removed from 8th Edition deep strikes.  It was abused.  The beta changes are correcting that. 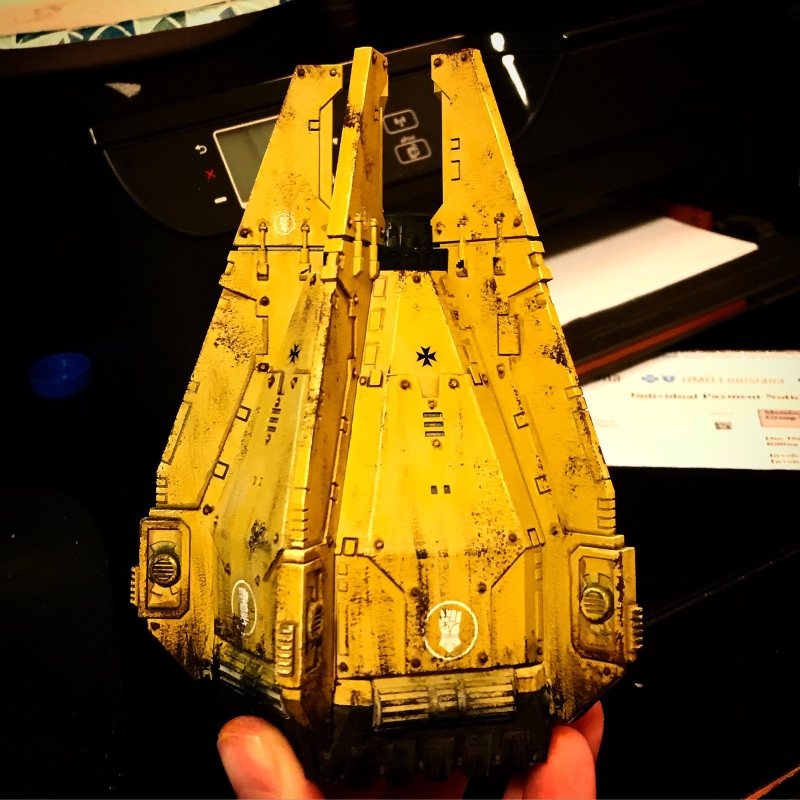 I’ve played a few games with these beta rules. And they’re amazing. Turn two deep strikes just feel more powerful. They’re rushed-to-the-battlefield-reinforcements, desperately arriving to turn the tide. My drop pod Sternguard squad laden with combi-meltas is still ridiculously effective. As someone that’s been playing Games Workshop games for over two decades, I thoroughly enjoy these beta changes and what they mean for the health of the game. Are they perfect? Of course not! But they’re an indication that the rules team is actively listening to feedback and is working in “real time” to make a fun, compelling ruleset.

But let me close with one final thought:

This shit right here has caused the most debate in our school club. I am happy to say the above validated every argument I’ve ever made on the topic, and thank God. It just makes sense! You’ll hear people lament, “But my all Khorne army!” to which I say, “Use your got-dang bolt pistols / grenades / bloodthirster whips / plasma pistols and make a fucking hole!” The volume of people that immediately jump to the conclusion of “no room, can’t assault = GG” is utterly depressing. Some even, laughably, say it makes shooting armies invincible. Why? Because a player placed a single unit of troops on an upper level? What if I place a melee unit completely behind a piece of line of sight blocking terrain? Is that an unfair disadvantage for shooting armies, who now have no way of shooting them? HOW DARE YOU UTILIZE THE TERRAIN TO GAIN AN ADVANTAGE! It’s just such a bizarre stance.

Let’s pretend for arguments sake that the fortified unit is indeed invincible (lol). If one single unit in the entire enemy force, locked away on some tall building, is the reason you’re losing, have I got news for you! [Spoiler Alert: u bad].

Nevertheless, the mob has spoken, and the prevailing climate online is “dis dumb, no fair.” And it’s for this reason I both admire and worry for the utilization of the (awesome) WH Community Team. Will they just hear this vocal minority? Will those who enjoy these changes speak out?

What do y’all think? Let me know in the comments, would love to hear from all sides!

*Hyperbole. Don’t get too mad, nerds.