Sanctus Fraternus is a Cardinal world that lies on the periphery of Segmentum Obscurus; an unremarkable world devoted to the interred remains of many long-forgotten saints and martyrs. A vast bulk of its primary continent is a colorless bleak rock, oppressive slabs of grey stone upon which towering hive crypts protrude through the low hanging cloudcover. Several of these incredible black edifices dot the surface of the planet. The principle hive-crypt, the Glory of Eumaeus, has been largely destroyed from indigenous Ork attacks, who manage to maintain a strong presence in the equatorial wastelands. The labyrinthine catacombs, shrines, and endless ruined basilicas layered on top of one another now provide a haven for gangers and heretical cults alike. A terrifying, four-armed xenos deity has been rumored to live in the endless depths of the cavernous ruin, or so the locals would tell you.

Aachen Hive remains the de facto capital of the planetary system, boasting an incredible cathedral dedicated to the Emperor Ascendant, a vast and ancient system of (apparently) impregnable defensive batteries and complexes, and a sprawling fortress-convent of the Adeptus Ministorum. Cardinal Philip III oversees his diocese from the seat of power in Aachen, with a formidable garrison of the Militant Order of the Ebon Chalice. It is not known why such a large concentration of Adepta Sororitas maintain a constant vigil on Sanctus Fraternus, but those who reside in the shadow of the convent rest easier than most.

The jagged shale fields that comprise a majority of the planet’s surface are cold and inhospitable. Soaring mountains range the length of the three continents, creating swirling, electric storms that drive inhabitants into shelters when their fury manifests. The native Bad Moon ork tribes have carved out great networks of tunnels and fortresses in these wastelands, hidden in shadows of mountains, and deep within chasms crisscrossed with dilapidated gantries and rundown mining facilities. They gratefully loot the abandoned imperial equipment, from simple servohaulers to gargantuan mobile mining platforms. The ramshackle armadas of orkish vehicles roam the wilds, preying on any foolish enough to brave the harsh environment. They’re typically not organized enough to pose a significant threat to the major hives, though outlying settlements are frequently raided.

When Glory of Eumaeus fell, its many spires and reliquary-mausoleums plummeting from their towers, the planet went mad. Somehow, beyond all reasoning, the Orks had managed to goad several great asteroid “Roks” into the gravitational pull of Sanctus Fraternus. Irreplaceable remains of long remembered heroes were obliterated in an instant. Priceless relics and grand cathedrals of the Imperial Cult were shattered, looted, and desecrated at the hands of the greenskin attackers. The swift and unforeseen assault by the unified Ork clans was too much for the planetary defense forces to contain. It swept, unhindered, across the entire surface of the planet. However, it was when the green tide reached the perimeter of Aachen that all hope seemed lost. The ancient defense lasers and overlapping curtain walls were soon overwhelmed by sheer numbers of orks — several breaches were successful within the first week of the siege (notably the penetration of the weaponized, looted mining platforms Monitork and Merrimork). Cardinal Philip III personally extolled the Sisters of the Ebon Chalice to valiant acts of heroism, as handfuls of Sisters held entire mobs of Ork Nobz long enough to evacuate the besieged districts. 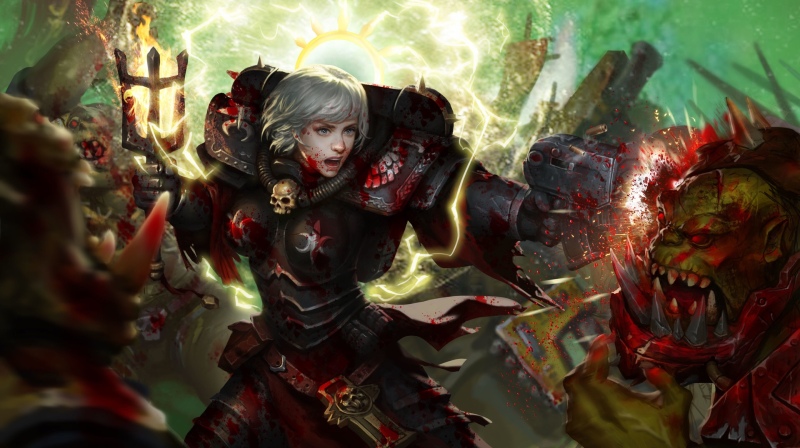 It was when the hour seemed darkest that the faith of the defenders was tested. Through it all, none faltered in their belief in the Emperor’s Will. Their reward was found in a pair of Astartes battle barges that emerged from the Warp bearing the yellow livery of the Imperial Fists. Within minutes, drop pods were crashing into the heart of the ork lines, disgorging veteran squads of space marines who dispatched the greenskins with precision volleys. The remaining Adepta Sororitas rallied around their Cardinal, rushing to aid their saviors, eventually driving back the seemingly endless tide.

The Orks were driven back into the wilds, to lick their wounds, but the Glory of Eumaeus would lay in ruin henceforth. It stands as a bitter reminder of the cost of such a conflict, a haunting black monolith on the grey horizon, piercing the clouds with its shattered spires. The surrounding region has developed a reputation for being haunted by the disturbed souls of those previously interred there. Orks have taken root in the vicinity, and the derelict hive itself is now home to unimaginable horrors.

The Ecclesiarchy, at the behest of the Cardinal, requested the Imperial Fists leave a small garrison in return for providing a tithe of recruits to the Chapter. The Sons of Dorn agreed, and maintain a small fortress on the outskirts of Aachen to this day, safeguarding the precious few remaining relics.